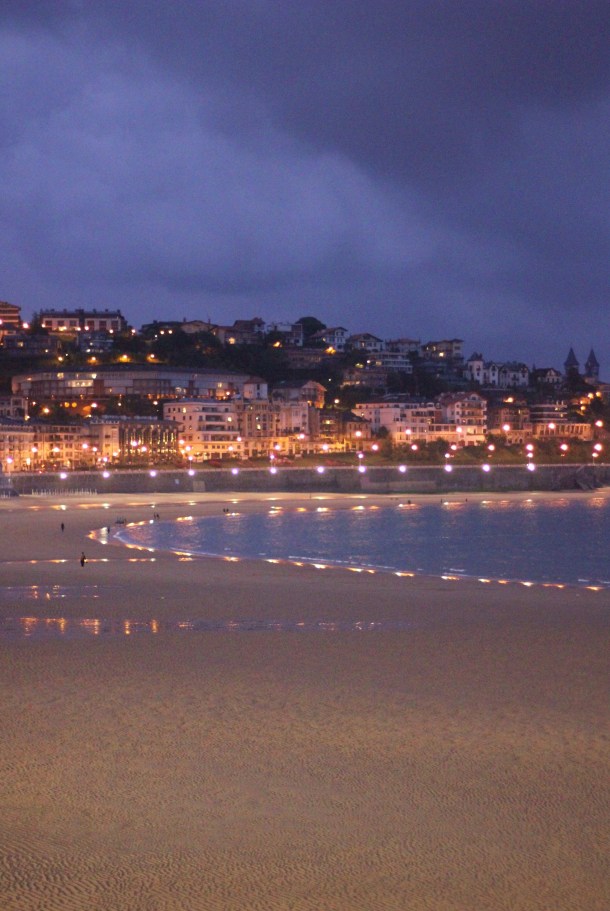 Just a few miles from the French border in the Basque region of Spain sits San Sebastian, petite and perfectly-formed. The city and surrounding hills boast no fewer than 16 Michelin stars at the last count so it’s no wonder the region has become a veritable foodie mecca (click here for my review of Martin Berasategui, one of the city’s glittering 3* restaurants). But beyond the Michelin star-studded world – all starched linen and edible masterpieces – lies an utterly beguiling, stand-at-the-bar and throw-your-napkin-on-the-floor, everyday world of bustling pintxos (Basque tapas) bars. You can’t eat here and fail to fall in love.

If you’ve spent a few days in Donostia (its Basque name) and missed the pintxos bars, something has gone horribly wrong. There are rows and rows of them. And with food ranging from molecular and modern to comforting and traditional, there is something for everyone. Most of the best bars are centred around a few main streets in the Parte Vieja (old town) – broadly between Calle 31 de Agosto to the North and Calle Pescaderia to the South, flanked by Calle Mayor to the West and Calle San Juan running to the East – which makes them perfect for a bar crawl. In fact, it would be rude not to.

We were lucky enough to spend a few balmy nights last June methodically eating our way round the city – here are my top picks (in alphabetical order because I couldn’t bring myself to prioritise them!) followed by my tips for blending in with the locals. And hey, if you get completely lost and/or a dog eats your map, take a few deep breaths and remember this: if you follow the crowds and your nose, you’ll struggle to go wrong – you are in Spain’s gastronomic capital, after all. Oddly, you can also judge the quality of a bar by the number of tissue napkins strewn on the floor – postprandial littering is an established custom here. But no plates on the floor, people – we’re not in Greece.

1. Atari Gastroteka
Calle Mayor, 18
Flavour: Hip, cocktail-bar vibe with beautifully-presented cold spread on the bar. Handsomely situated on the corner of Calle 31 de Agosto and the Calle Mayor with tables spilling onto the street. If you can’t get a table outside in the summer (you won’t), sip a glass of something cold and people-watch on the steps outside the Basilica de Santa Maria opposite instead.
Don’t miss: Good selection of lighter fish and seafood options. And they mix a mean G&T.
We ate: Seared red tuna with tomato ‘water’, langoustine kebab.

4. La Cuchara de San Telmo
Calle 31 de Agosto, 28 (set back from the road)
Flavour: Hidden gem tucked away from the main street, just before the church. Cosy bar serving up hearty modern fare. No cold dishes so order from the board (English menus available). We were so taken with this place, we called to cancel a restaurant booking just so we could extend our aperitif here!
Don’t miss: It’s got to be the carrillera again…
We ate: Carrillera (braised beef cheeks), pulpo de roca asado (grilled rock octopus – handsome portion and tender too), cochinillo asado con cerveza (roast piglet with apple), gambon asado con aceite de vainilla (grilled langoustine in vanilla oil).

6. Please sir, can I have some more?
If you’re still hungry after all that and you go crazy for…
…anchovies, head to Txepetxa for the little critters every which way (Calle Pescaderia, 5);
…mushrooms, head to La Cepa for a plate of (top dollar) hongos a la plancha (grilled wild mushrooms with confit egg yolk) (Calle 31 de Agosto, 7);
…experimental cuisine, head to Fuego Negro for creations such as kobe beef slider with ketchup-infused bun (Calle 31 de Agosto, 31);
…dessert, head to La Viña for their legendary cheesecake (Calle 31 de Agosto, 3).

And now for my top tips on how to get ahead aka How to Eat Pintxos Like a Pro:

What to eat?
As well as the appetising spread of cold dishes on the counter, most bars also have a short menu scrawled on a blackboard above the bar which should not be overlooked. This is often where the tastiest dishes, made fresh to order, are to be found. Don’t be frightened and try to be adventurous, even if your Spanish vocab begins and ends at cerveza (or if the indecipherable Basque words, every other letter an ‘x’ or a ‘k’, have thrown you) – there is often some English on the menus. Most places have a speciality – look around and see what the locals are snaffling.

What to drink?
San Sebastian is known for its txakoli – a local white wine, light and slightly fizzy but still pleasingly dry – which is refreshing and goes down a treat on a summer’s eve. The wine is poured into large glasses from a great height to aerate it – a dramatic if slightly splashy ritual. Alternatively, a glass of red – most bars serve Rioja and, one of my all-time favourites, Ribera del Duero is also popular – or chilled beer wouldn’t go amiss either. Wine lists are generally not available so just pick your colour. A word on measures: don’t think you’re being short-changed when you see the size of your glass – the idea is that you have just one or two pintxos, something cheeky with which to wash them down, and then move on to the next place. No 250ml wine measures or pints here, Brits!

How to order?
Good (and probably even the not-so-good) pintxos bars get busy at mealtimes. I mean really busy. Be assertive and catch the waiter’s eye to order at the bar – don’t expect table service. And if you’ve ordered a hot dish, remember the name and listen out for it – the waiters often shout out dishes as and when they arrive from the kitchen and readily hand them to whoever claims them first – I have witnessed unintentional(?) poaching first-hand!

How much to order?
The portions range from one or two mouthfuls to larger dishes for sharing called raciónes. If you want to blend in with the locals, just restrict yourself to one or two morsels at each bar or a sharing plate for a group of you, washed down with a drink, and then move on. You can make a whole leisurely evening of it and it allows you to digest between ‘courses’ – well, I say that, but the bars aren’t really far enough apart for that – it just sounded healthy…

Will I get a seat?
In a word, no. If you play the long game and camp out, you may be able to pounce on a bar stool as someone leaves but expect to prop up the bar. Many bars do have a few tables but they are always packed and being on your feet at the bar means you’re in the middle of the foodie action.

When to visit?
Most bars and restaurants are closed part or all of Sunday and/or Monday so check ahead to avoid disappointment!

Solo vs. tour guide?
You could sign up for a pintxos tour where you get ferried from one place to the next in a group – I’ve heard mixed reviews – but I dare you to go it alone (and to spend the considerable sum you save on more pintxos!). It’s in part the spontaneity that makes a pintxos bar crawl so thrilling: have a rough plan, by all means, but then have fun deviating – armed with a map, it’s not as scary as they say. Maybe you get chatting to some friendly locals who recommend a must-try, maybe you want to take a breather between courses and take some night shots of the city, maybe you want to re-order what you just had because you can’t believe there can be anything better in the world than this carillera in this sauce in this bar. Maybe you have finally got a seat and want to soothe your tired legs with another txakoli. Whatever it is, I say do it at your own pace. It’s your holiday, after all.

So what are you waiting for? Book your long weekend now and don’t forget to send me a postcard (and pack trousers with an elasticated waist)!

My name is Jamila and I am a passionate cook, amateur photographer and food writer based in London. I have recently quit the day job and gone back to school to train in the art of cookery at Le Cordon Bleu! My recipes feature fresh, simple, seasonal ingredients (mainly fruit & veggies). I draw a lot of inspiration from my travels to different countries and cultures so you’ll find a real melting pot of flavours rubbing up against the more familiar classics. As I suffer from CFS/ME, many of my recipes also have a nutritional focus as I try to navigate the minefield of chronic illness and heal myself one bite at a time. Bon appetit!